Castle Builder was a game changer. The sheer size of the graphic production was colossal. Ten complex Castle designs were required for each of the game’s several kingdoms. And each kingdom would take the player to different locations, cultures and realms. To immerse the player into each of these unique kingdoms, a plethora of emotions would have to be conveyed throughout the game.

To match the project’s groundbreaking production values, a mind-blowing music score was created.

The client, Rabcat, pursued production carefully. A prototype of Castle Builder was teased at the ICE Totally Gaming fair in London early in 2012. And revealed the complete production at the London ICE fair in early 2013. The project was huge. However, initially, the music and audio production for the project did not quite match the game’s overall ambitions, with only one piece of music set to be played while constructing all 10 castles within a kingdom. 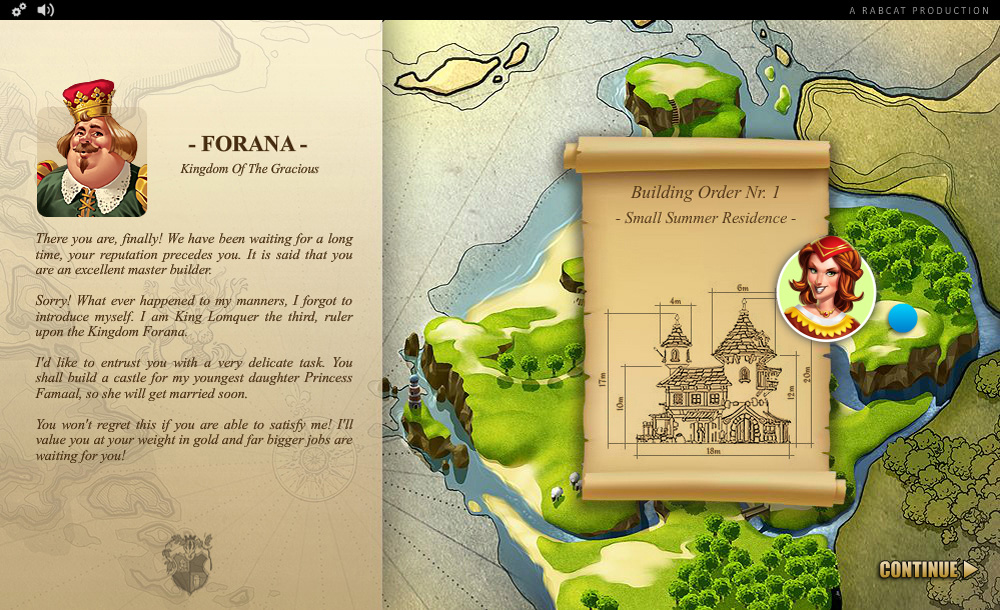 But fate has its ways. And circumstances conspired to push the music production to heights worthy of the game’s scope. That is why Rabcat approached MADLORD.

Exceeding expectation, MADLORD submitted three pieces of music for each kingdom, suggesting a switch between them according to the game stage and castle building stage, thus adding dynamism to the music within a castle.

However, it wasn’t a smooth road.

This project was a true labor of love.

There are usually three possibilities when a new type of production is introduced to the industry:

1 – The first production is unforgettable, mind blowing. A game changer.

2 – The first production is ok and later improved further and further until the initial vision is reached.

3 – It is a total failure and not pursued further.

For this project, MADLORD aimed to push the limits. Set new standards. Go far beyond the ordinary.

The mission was clear: make the first Castle Builder the one to remember. The one that will stick in the hearts and minds of players around the world. There won’t be another first time.

This was the moment to make a statement in online gambling.

`I DREAM OF´ MUSIC SOUNDTRACK 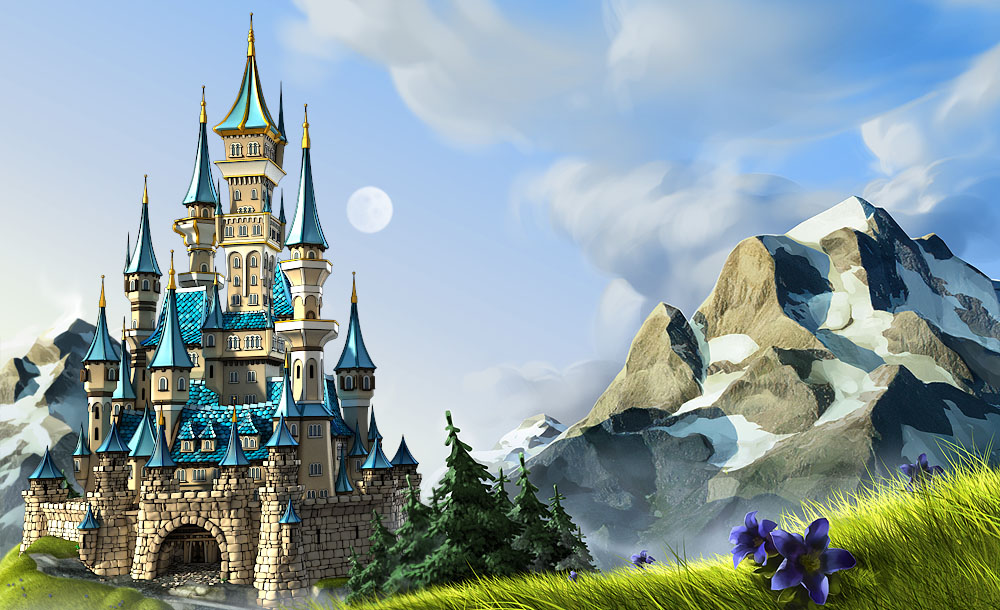 The kingdom was one of Disney proportions. Love and romance had to form the foundation of this orchestral score.

MADLORD evoked these fundamental emotions, with charming twists and turns of woodwinds, chimes and xylophones. Sudden bursts of brass and orchestra crescendos. The beloved add9, sus7, sus13 I/bVII, M7 chords supporting moments of tension and release. All combining to create the magic required for this kingdom.

The aim was to create the emotional impact of a Broadway score.

The score was challenging. Love and romance differ greatly from typical fantasy and adventure genres.

Broadway musicals, such as Miss Saigon, were studied in detail to exploit the evocative effect of harmony in this genre.

The score was a joy to create. After all, love and romance are intimately linked with fantasy.

Lyrics were always part of the plan.

In fact, there were lyrics written – harking back to Broadway spectaculars – but no time left to record the tenor and mezzo soprano voices to complete the music and take it to a new level. Part A was the main idea. And now that it was done, work on the next kingdom would commence. The rest of this instrumental piece would be left to be completed in the future. 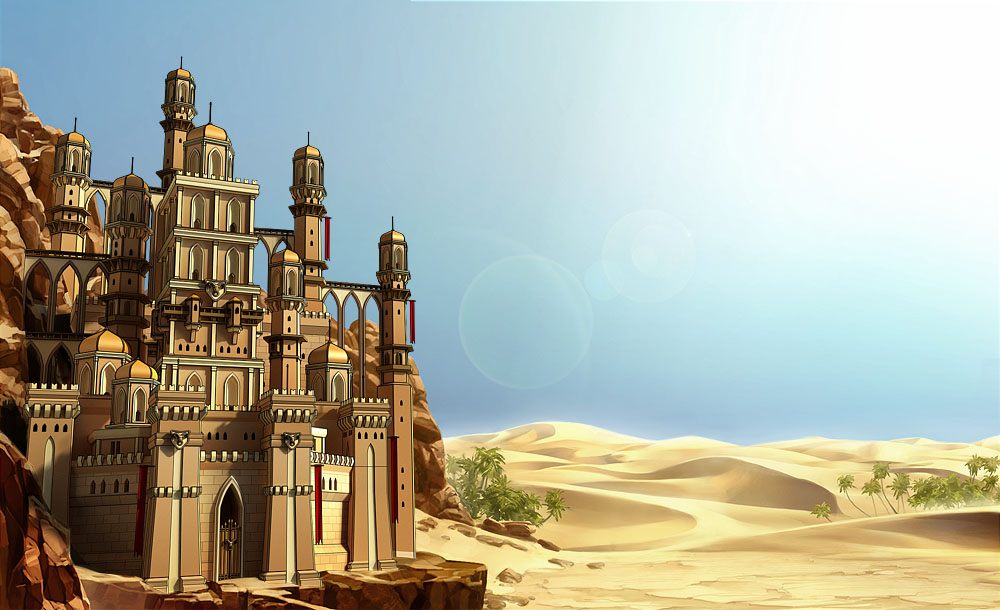 The sensual timbre of the Duduk was absolutely essential in this eastern-based score. As was the eastern-tuned string ensemble. Which, when mixed with the twelve-tone equal temperament tuning of the west, created a good balance easily understood by western ears. And at the same time, it gave a taste of the exotic and sensual sounds of the Middle East.

Previous Egyptian-inspired music projects had given MADLORD knowledge of the Arabic Maqam-system. Which served as a point of inspiration. A further study of similar Persian scales helped MADLORD to delve into this region more deeply.

Finally, the Turkish Maqam (Makam) Zengule scale was used for the ascending melody and the Persian Homayoun scale when descending. And alternating between both as MADLORD saw fit.

Two things had to be portrayed by the music.

The vastness of the Middle East. And the intoxicating sensual element of this rich and ancient region.

The original piece was longer. Later it had to be divided into two – “Desert Trance” and “Forbidden Ecstasy”. The pieces came in a moment of inspiration. The exploding passion of hidden desires resides in the heart of every mortal that has ever lived. In the hands of artists, a slight flash of remembrance can unleash hours of creativity.

The climax of this piece is quite different from the finale of “In Search of the Lost Kingdom”.

The climax is completely feminine

It is preceded by a dance of seduction. Constantly pounding your heart beat as it slowly becomes more, and more arousing. Suddenly a clear change of mood takes place. The Duduk spells this hypnotic state. Emerging like an oasis of pleasure. A brief moment preceding the ecstasy.

Followed by waves and waves of crescendo cymbals and french horns, until the climax is reached.

The orchestral score was almost complete at this stage. Now with two strong kingdom music scores almost complete, it was time to move on to the next important task: interface sounds.

…to be continued in Part 2.

The stakes were high. Much rested on the success of the audio production of this huge, unique video slot. A vast amount of extra time was invested into turning this production into a true statement of innovation. One that could help Castle Builder set the bar in online gambling. The pressure was on.


Foxium is a supplier of premium video slot games to the online gambling and casino industry. Based in Estonia, they create a superior gaming experience through exceptionally crafted games built around storytelling. A rising name in the casino gaming industry.

MADLORD has provided Foxium with the following services for their premium video slots and trailers:


“MADLORD understands quickly our audio needs and add their own unique creative flair to produce sounds that are far beyond the ordinary.”

MADLORD has provided Golden Rock Studios with the following services for their video slots and trailers:


MEGARA is a band born in Spain. They classify their style as a perfect mix between sinister and cotton candy. MEGARA has placed itself in its short life in the spotlight of both the press and the public with a strong fan base in Spain, Mexico, Argentina, Chile and throughout Latin-America. Its bipolar facet mixes darkness with the totally opposite side to it, loaded with unicorns, knickknacks and fucksia.

MADLORD has provided MEGARA with the following services for the closing concert of their tour "Aquí Todos Estamos Locos":

Play'n GO is one of the largest and most recognized gaming entertainment suppliers of online slots to the casino industry in the world. Their innovation leads the industry by providing an unmatched portfolio of titles to regulated casino operators in over 25 jurisdictions.

MADLORD has provided Play'n GO with the following services since 2020 for their premium line of video slots:

MADLORD has provided Tom Horn Gaming with the following services for their video slots: